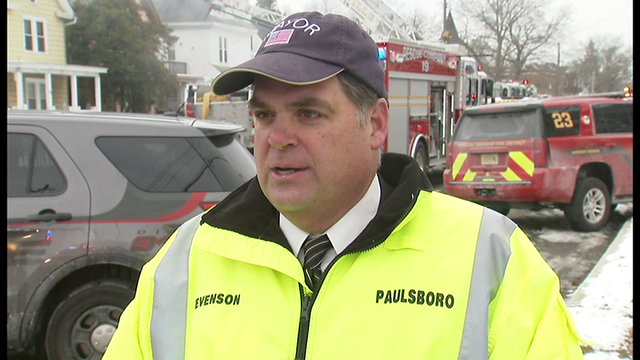 These days Heroes are a dime a dozen. They adorn the covers of comic books, run through the video game battlefields and soar across the movie screen. But are these really the Heroes we want to rescue us in times of real danger? No! We want a Hometown Hero, someone we know and trust, someone like Paulsboro Mayor, Gary Stevenson!

According to NJ.com, Mayor Gary Stevenson, who has been a member of the Paulsboro Fire Department for more than 30 years noticed dark smoke coming from a house  as he was on his way to a meeting. This wasn’t just chimney smoke it was the kind of smoke that only a fire can produce. Mayor Stevenson was actually on his way to go hear Gov. Chris Christie’s state of the state address when he saw smoke and then fire pouring from the top floor of the house. The Mayor started knocking on doors to see if anyone was home and luckily his knocking was enough to wake the woman who exited the building safely. Mayor Stevenson then went in to make sure there’s was no one else inside and called the fire department!

Mbb Management’s main office is located in Paulsboro, NJ. MBB’s CEO, John Moser and Executive VP of Brand Management and Hotel Operations, Mark Ludes have been honored more than once with the opportunity to have worked with Mayor Stevenson. The heroic  Mayor has even invited MBB Management to speak on his behalf at the Gloucester County Chamber Meeting  about the benefits of having our office located in the great borough of Paulsboro!

MBB Management would like to thank and honor our Hometown Hero, Mayor Gary Stevenson by  putting it down in words. THANK YOU MAYOR STEVENSON. You are a true Hero, a terrific Friend and an exceptional Public Servant and Community Leader. We look forward to working with you in the future and support you in all you do for our great town of Paulsboro. You’re Our Hometown Hero.

Ready to be a #businessowner or start franchising?